Sometimes Less is more. Less time for work that is.

Today, work-day often is 24×7 affair, particularly if you are running your own small business. You are always checking your emails, answering emails from your prospects or customers. Although you may be seemingly enjoying your weekend or vacation, it is often hard to get away from work completely.

I used to be that way too. But lately, I have found that getting away from work completely, say for weekends or on short vacations, actually rejuvenates you and make you more productive. And you get just as much done in the allotted time, if not more. Remember the famous Parkinson’s Law: “Work Expands to fill the available time for its completion”?

This statement, first made in 1955 by British author Cyril Parkinson for an article for “The Economist” is one of the most profound observation. So when you reclaim your personal time to be spent with family, friends, and on non-work things, you end up compressing the time available to finish the work and you manage to do it!

This past memorial day was amazing. Our two sons were back from college and with us for a few days. The week before my older “twin” boy (older by 7 minutes),  declared that on Memorial Day, we were going to clean up both, our garage and basement. Our detached garage (which is actually used as a workshop and storage area) had become a complete mess – it was impossible to make your way from the front to the back). Basement had also piles of paper and stuff – things that we collect. So we had a three day deadline to clean up the mess that we created over past 10-15 years. Actually we got a late start on Saturday, but by 3 pm we had over half the stuff in the garage separated out as trash to be thrown out. And we discovered how great the “1-800-Got-Junk” was. While we were creating a giant pile in the driveway for a trash hauler, I was pleasantly surprised that I could book a time for Got-Junk people to come an haul away all the junk the same day in the 3-5 pm window! So with 3 pm deadline looming (which was just about 3-4 hours since we started our clean-up), we had to finish separating out the trash in just a few hours. And true to Parkinson’s law, we managed to do it. On Sunday, while my sons put up some organizers and shelves in garage and organized the tools and other stuff in the garage, me and my wife tackled the basement and got it completely cleaned and organized by Monday evening. One long weekend, two seemingly endless tasks, done very well and within the available time. One more victory for the Parkinson’s law.

Yes, with Teamwork, focused energy, and a hard deadline, we are capable of doing amazing things. But we are after-all humans – we need to be reminded of this often.

Do you find yourself procrastinating on things that must be done? Or always falling behind in your tasks? And always stressing out because things are not getting done? Or working all the time?

We needlessly stress out on things on our “To-do” Lists, make complicated plans, give our tasks unnecessarily long time lines and then put them off till the last minute because we fear tackling them. 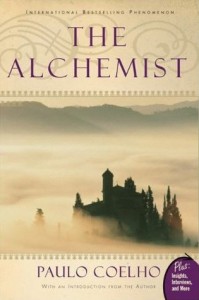 How did we end up in this business and why did we choose a few niche marketplaces – laboratories, imaging centers / medical businesses and IT? We are often asked this question from our clients, customers, and prospects.

I wish we could say that it was part of our well thought out strategy, but in reality it was was a combination of serendipity and in terms of start-up lingo, ‘pivoting’ or course-correcting, to take advantage of new opportunities.

Years ago, I read the book called The Alchemist – an international best-seller by Paulo Coelho of Brazil. Although, the book is a fiction, I thought it provided some of the most interesting business lessons. Its central themes has always resonated with me. One of the message is that when you want something bad enough, the universe conspires in helping you achieve it. And it also goes on to illustrate how the hero in the book, Santiago, gets a number of signals or dreams guiding him.

I personally have experienced many situations where some voice has guided me or helped me – whether it is an intuition, a dream, an inner voice or just a seemingly unlikely coincidence which solved some intractable problems. And I have spoken to many people who seem to have had similar experiences.

In Alchemist, our hero also has these dreams or signals, which provided a guidance or help, seemingly out of no-where. And the message is to accept such help that will allow you to reach your goal.

In my case, as a research scientist for a start-up, we were trying to solve a particularly tricky problem of getting pure plasma out of a drop of blood using a membrane ( a super-fine filter). At the time, in the early 1990s, this was a big deal. and no-one except one large company was able to do this. They used glass fibers and the process was patented. It worked but not particularly well. If we succeeded, this could allow a large number of other blood tests to use a simple way to extract plasma for a quick 1 or 2 minute tests.

As a lead scientist, I had probably tried every type of membrane that I could lay my hands on and nothing worked. However, the way things were going, I was confident that somehow we will solve it as there was a feeling within me that this was destined to succeed. One day, I was sitting in my lab, kind of stuck, thinking of what else I could do. And then the “signal” came. Someone came to the lab and delivered me a small fed-ex package containing some other type of membranes from that I had ordered a while ago. I had forgotten all about it since I had ordered so many. It was nitrocellulose membrane from a company called Gelman. Thinking that I had nothing to lose by trying out this membrane, I quickly put it over my test strip and put a drop of blood and I could not believe it – within a second, I got pure plasma coming out on the other side. I was amazed as I had tried similar nitrocellulose membranes from other companies and they did not work! So we thought we had the problem solved!

But what happened next was even more amazing. We soon were running out of this membrane and we ordered some more from the same company. But when we got it, we found that this time, these new membranes, which were from a different manufacturing lot, did not work. So we ordered several different lots. It turned out that only the first lot from this company worked!

In other words, I was just lucky enough to get the right lot from this company at the right time. If I would have gotten a sample from one of the the “bad” lots, I might have easily given up! We eventually figured out how to convert the “bad” lots of this company’s membranes into good lots. We went to file patents and license this technology.

But it just proves to me that often there is a “divine” intervention. I wanted this to work badly, and the universe intervened to make it happen for me.

And over the years, there have been a number of situations where when I or when our company was stuck, there was always some event, or signal or guidance, that helped us at the crucial moments. Or when there was a fork in the road, somehow we had a guidance of which road to take.

I have spoken to a number of people who have had similar experiences. In fact there are dozens of inventions and ideas (including nobel prize winning ideas), that originally came to the inventors or creators in dreams. Example include, the sewing machine, discovery of benzene, and many more. And I think that is one reason The Alchemist has resonated with so many people and sold over 65 million copies in 56 languages.

Even Steve Jobs, in his famous Stanford University commencement address of 2005 talked about connecting the dots : “So you have to trust that the dots will somehow connect in your future. You have to trust in something — your gut, destiny, life, karma, whatever. This approach has never let me down, and it has made all the difference in my life.”

For me the book represents – If you want something badly enough, work very hard to achieve your goal, have faith that you will succeed, and when help appears out of nowhere, whether it is in a concrete form or through intuition, dream or a signal, be ready to accept and act on it.

Would you like to improve the value of your company? Take 13 minutes to complete the questionnaire and get your Value Builder Score instantly! It is Free.
Find out more here